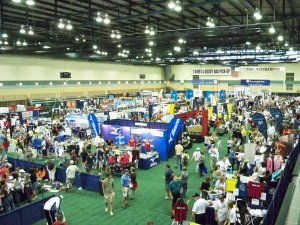 I’ve run several races, including a couple of half-marathons, but I’d never been to a real, live, honest-to-God expo. We arrived at Disney on late Wednesday night. So Thursday we headed to a park until noon, when I planned to leave the family for the expo which started then. I wanted to get my stuff before the crowds arrived on Friday. I had heard that expo lines could be quite long. The WDW expo was huge. It spread over two buildings. Runners were sent to one building to submit their race waivers and test the champion chips. Since this was my first marathon, I bought my own chip and was able to run it over a timing mat. My name and age appeared. I was good to go.

We then went to the other huge building for the packet pick-up and gear-a-pa-looza. The race shirts are nice, long-sleeve tech shirts made by Champion and they ran true-to-size. I was really nervous about that. I am a “tweener” in sizes because of my weight loss and was hoping against hope that the shirt for my first marathon would fit. Disney made it clear that the shirt you ordered was the shirt you got. Not trading. In fact, I saw a woman holding up a piece of cardboard, like a person in need of tickets for the big game, which read “will trade a L for a M.” This was serious stuff.

After getting my packet, I went right over to the gear shop where all things Disney Marathon (and half, and goofy) could be bought. In quick succession I got a keychain, coffee mug, t-shirt, hat, Mickey stuffed animal in racing gear, Under Armour warm-up jacket, and 2 shirts for my boys which read “My Dad Ran the Disney Marathon.” No pressure there to finish the race now, eh? So I am sucker for souvenirs. Always have been. Since this was my first marathon, I had a great excuse and a pass from my wife on the dollar limit. Plus Disney gave you a “free” $40 gift card if you bought at least $125 in gear. So I figured it as a discount. I’m an expo newbie, so if it sounds like I got off the turnip truck in describing this stuff, please bear with me. But there was just about anything the runner wanted or needed (or didn’t need, but thought they did) from fanny packs, to shoes to gels of all sorts to new fangled shoe technology (no Newtons, though) to expensive photo packages with frames and plaques and all. All in all it was a blast. I had left my family at one of the Disney Parks in order to come over so I didn’t linger too long so I could get back to the kids and wife and ride some attractions.

We toured the parks on Friday and Saturday. I left the family to return to the hotel on Saturday afternoon. I planned to get all my gear ready for the incredibly early wake-up ion Sunday morning: 2:30 am. The first bus from the resort left at 3 am and I wanted to be on it. Again, I had heard stories of late buses and I didn’t want to be late for my race. I met me new good friend Dominic (http://themouseandmore.blogspot.com) and we rode the bus together to the pre-race area. Dom, since he was running the Goofy Challenge, smartly purchased access to something called the “Runners retreat, or something like that, and he left (as I would have surely done) for climate control, smaller potty lines, and some food and chairs. It was fun to meet this great guy, who I had shared blog comments and emails with.

The atmosphere at the race site was electric—even for 3 am. There was a 80s cover band replete with purple haired lead singer and Devo-hat wearing guitarist. The lead singer was diligent to remind us to hydrate. I thought there was a little something peculiar about a 80s cover band reminding thousand of runners to stretch and hydrate. Didn’t seem natural, really. The great folks affiliated with disneyrunning.com (the Orange Hat brigade-named for the orange disneyrunning.com hats (made by head sweats that the site administrator Robert was selling, had a huge meet up at one of the tents. The next 2.5 hours passed rather quickly with conversation and laughter until I decided to visit a port-a-potty. The lines—remember, there were thousands racing—were longer than I’d seen for port-a-potty visits, so I gave in to the bushes. Rest assured the bushes were popular that morning. My biggest fear was walking in the area that someone perhaps had already used for their relief!
I might add that visiting the bushes at the Disney marathon seems to be a long-honed skill, with much planning and organization. Several women carried a throw-away blanket to hold for each other as they did the nature thing. Others really didn’t care. It was dark enough that even the boldest peeping-tom wouldn’t see much—at least that’s what I was told. Some folks dived deeper in the Florida bushes than I think they should have. Let’s remember that Florida has all kinds of reptiles. The misfortune of the ill-placed snake or gator bite should worry all of us. 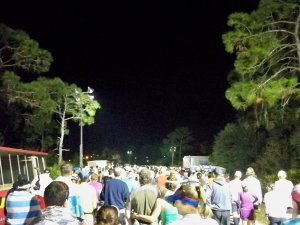 Walking to the corrals

With about 15 minutes to go before the gun the mob moved en masse to the corrals. I’ve never seen such a mass of humans moving in one direction like that. It was at the entrance to my corral that I finally met up with Jodi from Confessions of a Runner (http://www.confessionsofarunner.com/ ). We had exchanged emails and text messages and miraculously were able to find each other from the thousands of runners waling by. We stuck together to our corral and ended up running together for the first 10 miles. I am so excited for her, as this was her first marathon, too. If you get a chance, please listen to her wonderful podcast. 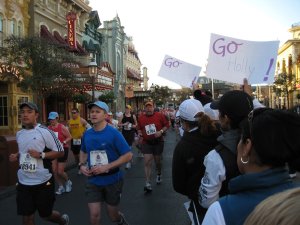