Yesterday I drove to Birmingham to pick up my orthotics. Here’s a pic: 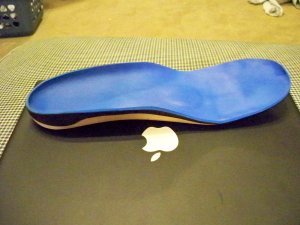 They feel and look better than I expected. I can’t run with them for at least a week. My feet have to grow accustomed to being supported in their normal state. So, I’ve worn them in my work shoes and will do so until early next week. But I think these will work out well. Of course, the proof will be when I run with them. If you will notice, there seems to be a round bump in the mid-foot area, just past the arch. He put that there to support that part of my foot. While I can feel it when I start walking, it feels good after a few steps. Kind of weird.

As some of you know, at least those of you who are Trilogy Running fans (www.trilogyrunning.blogspot.com), I travelled to Birmingham this past weekend to see the Mercedes Half- and Full- Marathon. Jason of Trilogy was running his first half, and his brother Shawn, who has a strange-but-true butt injury, came over. We had a running podcast summit and enjoyed meeting each other for the first time. They live in Atlanta, and I am in Jacksonville, AL, which puts us only an hour or so apart. They are two very nice, and very funny, guys. I took some pics of marathon surroundings during the race. I’ve never really paid attention to the finish line areas of such races unless I was crossing them, and became fascinated at the level of organization and preparation for the finish line, the part of the race that most people never forget, exspecially when it is their first. 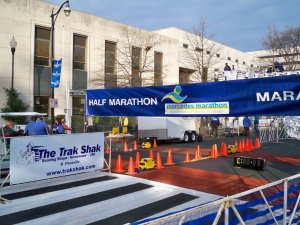 The finish line, not quite ready. 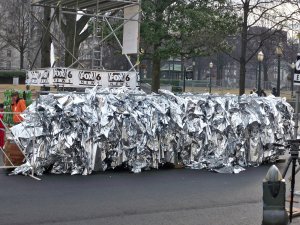 Lots of those thin Mylar blankets. It was a cool day, they would need them. 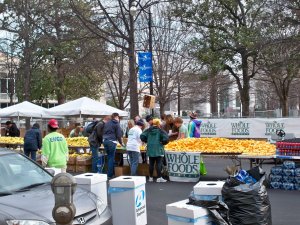 Here’s Jason. He was cramping pretty badly, so much so that several massage therapists came over to assist and see his calves, which seemed to be some sort of medical oddity.

Trak Shak (www.trakshak.com) is a local Birmingham running specialty store. The people there are sharp and know their shoes. I’ve bought several pair form them over the past year. Scott strand is a local running celebrity in Birmingham and co-owns and manages a couple of branches. He’s pretty fast–once ran a mile in 4:00:01. But they’ve always been nice to me and allow me to loiter in their store and ask pesky questions for longer than I probably should.