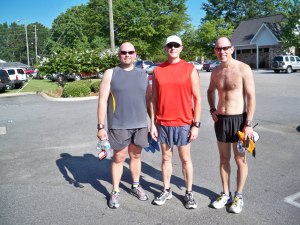 It has been a while since I reported on my weight loss progress. First, let me address what I’ve done. I get a lot of questions about how I’ve lost weight. I don’t consider this a diet, per se, as much as a lifestyle change. For years, well, all of my life, I’ve been a meat and potatoes guy. Starchy foods, lots of meat, snacking, etc. As I age (Will be 43 in April!), I realize that what I eat is of paramount importance if I am hopeful of living to see my wife and kids grow old. So, this summer when I started counting calories with modest goals of weight loss, I went into the process with the idea of longevity: longevity in eating habits, of life, of running.

So with the mindset that I wanted a new lifestyle, not just a diet, I entered late July with the goal of eating better foods and reducing the consumption of those foods that were not healthy for a 43 year old man to consume. For 8 weeks I used an iPhone app called “Tap & Track” to count calories with the goal of losing 1.5 pounds a week. I modified my daily calorie limits on and before those days that I ran long. After 8 weeks of counting, I had established routines for meals and discovered low calorie, but nutrient filled, foods to eat. I KNEW what I could eat and not gain. I was eating more healthful options: more salad, more veggies such as onions and mushrooms, carrots, and, yes, broccoli.
By October, I had started greatly reducing the amount of cheese and meat I consumed. This was a calorie decision mainly since meat and cheese were so high in calories that I could enjoy other, and more, food if I eliminated them. Plus, the cholesterol in meat and cheese just wasn’t there in carrots, for example!
The weight came off fast at first, and I would plateau every few weeks. But then it would start falling again. Slow and steady wins the lifestyle and life race, so I tried to have small losses or hold steady each week. Sure, there were weeks where I was heavier after days in which I consumed too much sodium, after long runs when the body was rebuilding, and after the Rocket City Marathon when I was in recovery mode.
What’s strange is that foods I never considered eating all the sudden became tasteful to me. Take broccoli. NEVER would you have convinced me to ingest that vile green stuff before July. Now, I eat it every day on a salad, RAW! Odd stuff. My whole nutritional outlook has changed and I am eating a more plant-based diet while eliminating meat and cheese altogether. My cholesterol is 50 points lower than a year ago, and my doctor has cut my blood pressure meds in half! My running has thrived as I no longer carry unneeded and damaging pounds on my body. Friends and family notice the change, which makes me want to be even better to my body, for them.
So what you ask is my weight now?
Well, I weighed this week and found that I am now at a weight I have not been at since 1986! I bought clothes last weekend in a waist size (38) I’ve not been able to wear since 1987!
I now weigh 189.5!
July starting weight: 231.5
Total loss (so far): 42 pounds!!!!!

On March 6, 193.5 lbs
Thank YOU for your support, your encouragement, your advice, your cheers. I couldn’t have done any of this without my friends who read this blog, listen to the show, follow me on twitter, engage me on Facebook. The congratulations go to you. So do the thanks.